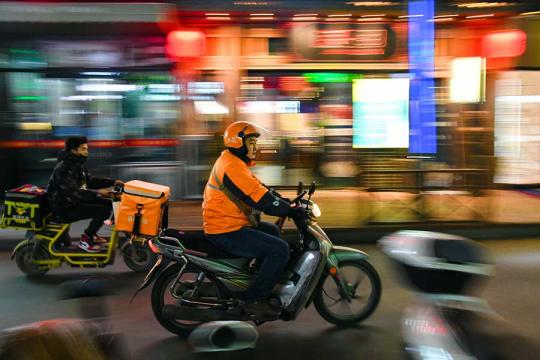 Yang Pengpeng, a deliveryman, dreams of buying an apartment for his family in Weifang, Shandong province. (Photo/Xinhua)

More workers are seeking flexible employment by registering with online apps such as food delivery titans Eleme and Meituan, or Didi, the taxi-hailing platform, rather than sticking with jobs in factories. In addition to greater flexibility, they are hoping to earn more money.

The number of people opting to join this new online labor force hit more than 7 million in 2017, a rise of 1.3 million from the previous year, and is projected to top 100 million next year, according to the State Information Center at the National Development and Reform Commission.

However, the transformation of employment patterns into a web-based job market poses challenges to the development of traditional industries as a result of an "employee drain".

According to a Meituan Dianping report, an on-demand service platform headquartered in Beijing, 31 percent of its delivery personnel used to work in factories, but they either quit their jobs because of low salaries and rigid work schedules, or were made redundant as a result of production cuts to reduce excess capacity.

A food deliveryman surnamed Zhang has been registered with Meituan in Beijing since July 2016. He said his previous job at a shoe factory in Shenyang, Liaoning province, brought an unstable income, which often resulted in financial pressures.

"The salary depended on the factory's order book. I could earn as much as 10,000 yuan ($1,486) a month in the two peak seasons－March to April and August to September－but I didn't get paid when the factory had no orders," he said.

"For me, being a deliveryman is much better, as I can earn more if I work more, which is fairer. Also, the job is much more fun as I meet different people on different days, rather than sewing shoes day after day, seemingly endlessly."

According to the State Information Center, the sharing economy will see an annual increase of 40 percent in the next few years, and will account for 10 percent of national GDP next year and 20 percent in 2025.

That will see the sharing economy become a major magnet for job seekers in the future, the center said.

For example, the food delivery market has expanded rapidly in the past four years. According to a report by Alibaba-owned Eleme, more than 3 million delivery personnel have registered with it. Meanwhile, the number of delivery staff members at Meituan has soared from 15,000 in 2015 to 2.7 million last year.

However, the rise in the number of people working in the sharing economy has resulted in an employee shortfall in the manufacturing sector.

iMedia Research, an industry analyst in Guangzhou, Guangdong province, said that by last year, the number of delivery personnel in Dongguan city had risen to 31 times the level in 2013, while 800-plus manufacturers in the city registered 100,000 job vacancies after Spring Festival.