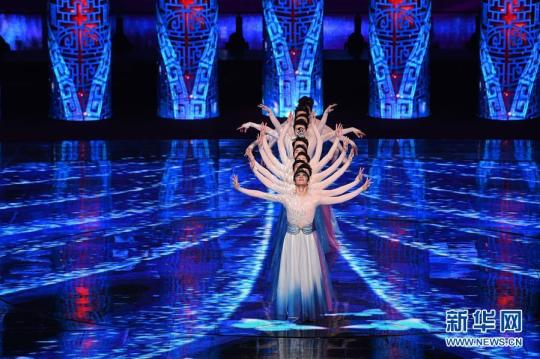 Artists perform at the opening ceremony of the International Horticultural Exhibition 2019 Beijing on April 28, 2019. (Photo/Xinhua)

A high-tech gala performance served as a conduit to connect visitors with flora during the opening ceremony of the International Horticultural Exhibition 2019 Beijing on Sunday night.

The chief director of the gala, Sha Xiaolan, spoke to media after the event and described the design and technology of the show.

At the beginning of the performance, a children's chorus roused attendees with songs of hope. Girls dancing in green silk skirts then symbolized willow branches waving in the wind, and set the tone for an ecologically themed evening.

"Set to the artistic backdrop of a large-scale garden scene, the opening ceremony blended images of mountains, lakes, grass and trees to represent elements of both man and nature, as well as culture and technology, with elements of China and the world clearly visible throughout," Sha said.

The technological element was one of the important highlights of the opening gala. He said that to showcase the full effect of the set, multiple scenes were employed and an adjustable-height stage was designed, with 29 LED video columns in the background.

This allowed the creation of a panoramic screen image with 3D effects, Sha added.

In the Chinese classical dance A Rainbow of Butterflies, actors dressed up like wings of the colorful creatures. In the background, moving images of thousands of butterflies fluttered about in Guirui Theater, the venue where the gala was held and that also serves as the main performance site in the sprawling expo park.

Another highlight of the gala was an 8-meter circular screen that performers can stand up, Sha said.

"Dancers can interact directly with the round screen to show off their technique, and it leaves the audience feeling like they are part of nature," he said.

In the performance titled Lasting Fragrance, part of the stage rose up to form a circular background, portraying the magnificent scenery of the Dunhuang frescoes in Gansu province using a complex mixture of colors.

A dancer in traditional costume flew above the stage with the help of cables, giving the audience a taste of airborne figures in the frescoes, he said.

Nearly one hundred models were dressed as flowers in the costume show - a segment inspired by the national flowers of the exhibiting countries at the expo, Sha said.

Nearly 1,500 people participated in the performance and the directors spent about one year to prepare the whole gala, said Pang Wei, deputy director of the expo coordination bureau.

A fireworks extravaganza incorporating Chinese elements took place at the end of the gala performance.