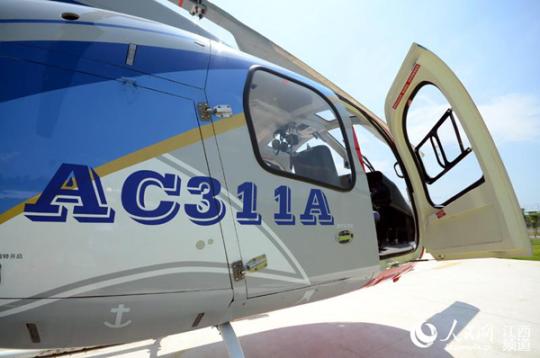 A Chinese-made AC311A helicopter is seen at the Yaohu Wetland Park in Nanchang, East China's Jiangxi province, on Aug 16, 2016. [Photo/People.cn]

China's domestically-developed AC311A light utility helicopter has completed its low-temperature flight tests, according to its developer the Aviation Industry Corporation of China (AVIC).

The two-tonne light helicopter model completed all aspects of testing at the site with ground temperatures of minus 30 degrees Celsius, representing the completion of its low-temperature flight tests, said AVIC.

The tests surveyed the operational reliability of the AC311A in low-temperature conditions and collected information on situations where the model would undergo missions in extremely cold and high-latitude environments.

The new helicopter model has conducted multiple flight tests on the ground and in the air, undergoing comprehensive tests on its major systems.

The AC311A light utility helicopter is developed by the Avicopter under the AVIC. It is designed with a maximum take-off weight of 2.25 tons and a climb limit of 6,000 meters.

The model meets China's surging demands in the general aviation sector for aircraft to be used for border patrol, law enforcement, rescue and relief missions and forest firefighting.

Avicopter is now among the world's leading helicopter manufacturers with more than 50 models in 12 series.