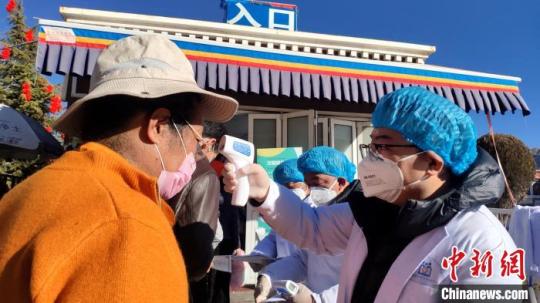 A medical worker takes the temperature of a local resident in Lhasa, Southwest China's Tibet autonomous region, on Jan 27, 2020. [Photo/www.chinanews.com]

Lhasa health authorities reported the first suspected case of novel coronavirus on Tuesday - the first in Southwest China's Tibet autonomous region - and the case is waiting for further tests by the Chinese Center for Disease Control and Prevention for confirmation, according to local authorities on Wednesday.

Tibet is the last region in China to report novel coronavirus cases.

The patient surnamed Zhang, 34, is a male resident of Suizhou, Hubei province. He took a train for two days and arrived at Lhasa on Jan 24 via Wuchang station in the Hubei provincial capital. On Jan 25, he was admitted to a local designated hospital for isolation and treatment, according to a statement from local health authorities.

Zhang is in stable condition, and those who made close contact with the patient have been traced and are under medical observation.

The region activated its second-highest level of contingency plan and established a leading group on Monday to curb the outbreak, with measures including screening travelers and disinfecting transport vehicles.

Tibet temporarily suspended all scenic attractions and tourist destinations starting Monday, including Potala Palace, the Jokhang and Ramoche Temples, in response to the region's second-highest level of contingency plan, according to the region's tourism development department.

Given the risk of infection by visitors who insist on traveling to the region, visitors from outside Tibet have to register at the region's Gongkar Airport and Liuwu Train Station. People with fever and other symptoms, or those who have made contact with the infected, will be under quarantine for 14 days.