Doctors, nurses stay at their posts in Wuhan 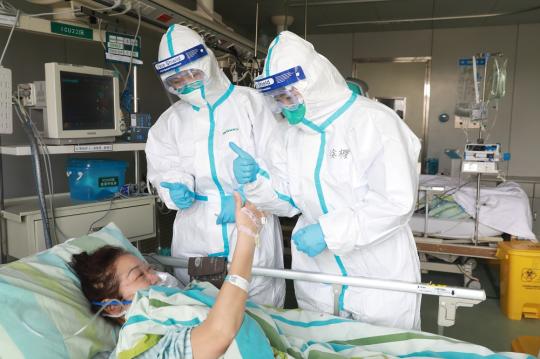 Editor's note: Hubei province has virtually isolated itself in a bid to curb the rapid spread of the novel coronavirus across China. Doctors and nurses in the province are staying at their posts to treat patients, with little regard for their own safety. In a series of exclusive interviews with China Daily, several hospital employees describe their work and concerns.

Chen Aimin, deputy director of Qianjiang Central Hospital in central Hubei province, is busy visiting health clinics in rural areas with a colleague to assess patients suspected of being infected with the novel coronavirus.

With a population of about 966,000, Qianjiang is just 60 minutes by high-speed train from Hankou Railway Station, located about 800 meters from Huanan Seafood Wholesale Market in Wuhan, which is believed to be the source of the outbreak.

In a telephone interview with China Daily, Chen said he and his colleague had just confirmed that a patient in one of the rural clinics is suspected to be infected with the virus. The 52-year-old man spent the night of Jan 14 in Wuhan and developed a fever three days later.

"The rural areas lack medical professionals and protective masks and clothing. My colleague and I are in charge of identifying suspected patients in the countryside and helping to transfer them to the city's designated hospitals for further treatment," Chen said.

"The whole of society should be united to cut off transmission routes, and people should be disciplined in their actions. They should wash their hands regularly, open windows for ventilation, stay at home, and avoid get-togethers."

Infected patients in severe or critical conditions are being treated at Qianjiang Central Hospital. On Wednesday, the hospital was treating four confirmed cases and 25 people suspected of having the virus. Before, it had more than 60 virus-related patients, so some were transferred to other hospitals in the city.

On Thursday, authorities announced that Qianjiang had 10 confirmed cases－one of the lowest numbers in Hubei－and 117 suspected cases. Thursday also saw the city introduce restrictions on vehicle use and close all diners, restaurants and food stalls.

In Wuhan, 10 hospitals and seven centers for disease control and prevention are qualified to evaluate nucleic acid detection-based tests for the coronavirus. In cities such as Qianjiang, hospitals send test samples to the Hubei CDC for examination. Chen said the results come back within 24 hours.

Like people in cities across Hubei, Qianjiang residents often visit Wuhan for personal or business reasons, while during Spring Festival, many who work or study in Wuhan return for family reunions. Moreover, people returning to Hubei from other provinces have to pass through Wuhan, a major transportation hub, before they can reach other cities in the province.

Experts believe ease of mobility and a lack of awareness of the potential risks in the early days were the main reasons the virus spread so quickly that the whole province had to be isolated.

"Our hospital president gained deep experience during the outbreak of SARS(severe acute respiratory syndrome) in 2003, when he worked in the hospital. It's a boon to our current prevention and control work, although we're under great pressure," Chen said.

Early this month, Chen and his colleagues noticed an outbreak of an unidentified form of pneumonia in Wuhan, with symptoms of respiratory tract infection.

On Jan 19, Qianjiang Central Hospital adopted several emergency measures, such as moving doctors to the fever clinic from other departments, adopting triage procedures with temperature checks and keeping suspected patients in an isolation ward. At the same time, the hospital purchased protective medical items, but they will run out within a few days.

"We are in need of N95 masks and protective clothing. If the number of patients in a severe condition rises, we will need more ventilators. Also, the supply of hospital beds is falling short of demand," Chen said.

He added that the local government is working to solve these problems, while individuals and businesses have donated funds and protective equipment.

Since the outbreak, the first batch of 30 medical professionals have been required to stay in the isolation ward with patients for 15 days, working at least 10 hours a day. When their period of duty ends, they will be isolated for two weeks in a hotel especially rented for them by the local government. They will be replaced in the isolation ward by a second team.

"The measures are designed to prevent our medical professionals becoming infected," Chen said.

He added that the local government is making great efforts to tell all residents, including those in rural areas, to stay at home. Community staff members will record the names of all those who return from other cities, and look out for people displaying signs of fever.

Song Meizi, who owns a grocery store in a town in Qianjiang, said,"The road smells of disinfectant, and nearly everyone on the street is wearing masks, including children."

The storekeeper, who wears a mask, protective goggles and disposable gloves during business hours, said badminton rackets and jump-ropes sold out quickly because the locals want to exercise while stuck indoors.

According to Song, village cadres started providing information about the coronavirus on Jan 22 via community WeChat groups.

They have also put up posters and banners, and handed out leaflets, while a car fitted with a bullhorn broadcasts information on the street. The roads are blocked with cars or excavators to prevent residents from driving out of the village.

"Nobody drops by anymore. During the Spring Festival holiday, our only way to kill time is to play mahjong with relatives and neighbors, but now people just stay at home and play against immediate family members," Song said.