Thousands of years on, revival of two legendary cities on Silk Road 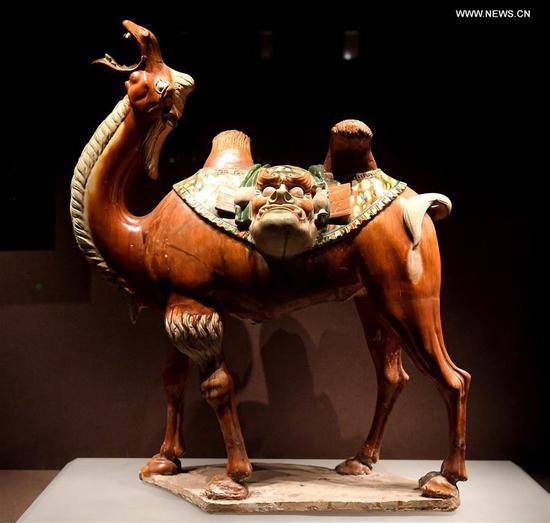 Photo taken on March 27, 2019 shows a tri-colored camel, a glazed pottery from An Pu's tomb of the Tang Dynasty, at Luoyang Museum in Luoyang, central China's Henan Province. (Xinhua/Li An)

As the spring awakens Bukhara, southwestern Uzbekistan, Chinese-made tractors pull harrows over the 2,000-hectare field, ready for the sowing of a new type of mung bean seeds cultivated by Chinese researchers.

This is just a corner of the Luoyang-Bukhara agricultural comprehensive demonstration zone with a planned area of 100 square kilometers. The zone is one of the cooperation projects between Bukhara and Luoyang, central China's Henan Province, after China proposed the Belt and Road Initiative (BRI) in 2013.

The initiative is aimed at building a trade and infrastructure network connecting Asia with Europe and beyond along the ancient Silk Road trade routes for common development and prosperity.

With a history of 2,500 years, Bukhara is one of the oldest cities in Central Asia and a center of trade and culture on the ancient Silk Road, while 3,000-year-old Luoyang is an ancient capital of 13 dynasties.

Around 4,000 km apart, these two cities were inextricably linked in the past, and now, their bond is being renewed.

Luoyang Museum houses a Roman gold coin dating back to the 7th century. The irregularly shaped coin has a bust of a bearded crowned man on front and a statue of a winged female figure -- the goddess Victory -- on back.

It is the first foreign gold coin unearthed in Luoyang. Every time the coin is on display, it attracts swarms of curious visitors.

According to Gao Xisheng, a researcher with the museum, the coin's owner was a foreigner who came to seek a living or success during the Tang Dynasty (618-907).

The exotic coin was discovered in a well-preserved Tang dynasty tomb in the 1980s. The tomb was found by construction workers when they were building a brewery on a mountain in Luoyang.

Based on research on the epitaph and a large number of burial objects, archaeologists said the tomb's owner An Pu came from the state of An in Central Asia, current Bukhara area.

In 630 A.D., An followed his father to the Tang Dynasty through the ancient Silk Road. Brave and battlewise, he became a military general in the dynasty. His son also served as a Tang government official.

The ancient Silk Road once connected China with the rest of the world and witnessed trade and cultural exchanges that benefited people of different civilizations.

"An would never have imagined that after more than 1,000 years, his hometown and resting place would once again hold hands and carry on the legend of the Silk Road," said Wang Xiaye, director of Luoyang's Foreign Affairs Office.

Before the first Belt and Road Forum for International Cooperation held in May 2017, Bukhara and Luoyang signed a memorandum of understanding to establish sister-city ties.

"Over the past two years, Luoyang and Bukhara have had frequent exchanges in the fields of economy, trade, science and technology, culture, historical site protection, and in particular, agriculture," Wang said, adding that Luoyang-Bukhara agricultural comprehensive demonstration zone is a major achievement.

Bukhara has a vast expanse of land and plenty of sunshine that are well suited to agriculture.

"The Bukhara government has offered us a lot of incentives, such as 15-year tax exemption and a 15-year fixed price of natural gas, electricity and petroleum," said Liu Heng, general manager of Luoyang Wanbang Selected Supply Chain Management Co., Ltd., which implements the project.

Since the signing of the contract in May 2018, a 2,000-hectare mung bean planting area and a mung bean sorting and processing factory have been built.

With the help of Liu's company, Uzbekistan's mung beans were exported in a special train to China for the first time last year.

"Our aspiration is to replicate China's advanced agricultural experience to countries and regions along the Belt and Road, while importing farm produce in short supply domestically, thus achieving win-win cooperation," Liu said.

The Second Belt and Road Forum for International Cooperation is being held in Beijing, and leaders including heads of state and government from 37 countries will attend the forum's roundtable summit.

After nearly six years of development, the Belt and Road Initiative has grown from a concept to a key platform for building a community with a shared future for humanity.

A total of 126 countries, including developed and developing nations, and 29 international organizations have signed cooperation documents with China on the initiative. With the support of Chinese businesses, industrial parks built in other Belt and Road countries have generated nearly 300,000 local jobs.

During his meeting with Chinese President Xi Jinping on Thursday, Uzbek President Shavkat Mirziyoyev, who is in Beijing for the B&R forum, said his country fully supports jointly building the Belt and Road, and is willing to promote the synergy between the Central Asia region and the initiative, elevate the level of trade, investment and cross-border transport, and deepen security cooperation.

"Luoyang has gained its glory as a prosperous city in different historical periods where merchants and goods gathered. As an open and inclusive city, Luoyang enjoys bright prospects in the construction of the Belt and Road," said Li Ya, Party chief of Luoyang.

The city has established economic and trade relations with 62 countries along the Belt and Road, and a total of 174 countries and regions have become its global trading partners. Some 460 kinds of products made in Luoyang have entered the international market.

Among them, the "Dongfanghong" tractors made by YTO Group Corporation, a leading agricultural machinery manufacturer headquartered in Luoyang, occupy around 90 percent of the market share in Kyrgyzstan.

Cultural exchange is also being boosted. Last year, 1.41 million trips were made by inbound tourists to Luoyang.

In September, Luoyang Museum is expected to exhibit cultural relics unearthed from the tomb of An Pu and his wife at his birthplace.

"People in Uzbekistan will have a chance to see these historical treasures and know about their owner's story as well as the unceasing legend of the Silk Road," Gao said.